While the core components are completely unchanged from my previous 20" iMac G4 mod, this represents the completion of the overall setup.  I would highly recommend this to anyone in search of a "weekend hobby" who shares my enthusiasm for this generation of apple products.  Most people seem to be interested in the 17" mod, but as someone who has used both, I would recommend putting the resources into the 20" mod, if you truly intend to use this as a main desktop computer.  (Obviously if you already have a 17" dead iMac G4, its a different story).

Personally, it has become difficult for me to use LCDs under 19" as I've become so accustomed to larger displays.  The 20" iMac is a sizable display as is, but several factors actually make the screen bigger than most 20" displays.  For one, the aspect ratio is 16:10 not 16:9, for 20" this makes a substantial difference (1680x1050 vs 1600x900) in the overall size and pixel density.  Plus, the nature of the iMac G4 itself allows you to pull the display much closer to you than an ordinary LCD would sit.  Even still, to be a workstation, I feel multiple monitors are invaluable.  I got fortunate in "spare parts" that I was able to put the iMac G5 (native LCD, Apple Cinema Display's controller, inverter, and power source) together very quickly.  However, there are multiple ways to "resurrect" an iMac G5 as an external monitor depending on available parts.  The effect of having both together is great.  The iMac G5 is also quite ergonomic, in both its sliding and tilting. 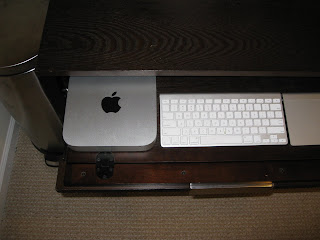 While an All-In-One was the ultimate goal, by the time I figured out how to "modernize" the iMac with a Core 2 Duo Processor, Core 2 Duos were obsolete. With the mac mini also growing in length and depth, an all-in-one would need to be a hackintosh.  While the discussion regarding the price point of the mac mini is justified (depending on how you value aesthetics, form factor, and low power consumption), you can not call this generation underpowered.  I have been quite impressed, unless you are a gamer, there is not much you can't do with this machine.  (Im using the 2.7Ghz Dual Core i7 with discrete graphics.) For those waiting for the "X-Mac" this really might be it.

I originally concealed this in the inner part of the desk, but the I bought a great under desk mount with 4 front facing powered USB ports. 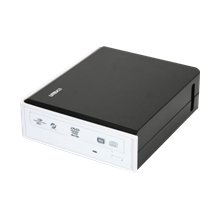 As I've mentioned the loss of the optical drive even as an option was unfortunate.  While both the G4 and G5 enclosures lend themselves to addition of an optical drive, its on the G4 where the drive actually contributes to the design.  While initially I was hoping to use bluray - Lion would not recognize the drive.  I ended up using an external DVD drive which I opened up and modified.

This is actually DC powered, so I used a power source from a broken internal drive enclosure.  I use the original iMac G4's AC plug, but split it, with one going to the cinema displays power brick and one going to the drive.  Thus, only one AC plug and no external power brick is required.


The rear panel contains the original 3 pronged receptacle for AC power, an on/off switch for the drive, a USB out, the outgoing USB cable and HDMI cable.  The USB cable belongs to the cinema displays controller which then supplies 2 ports.  One is taken up by the drive internally, the other is on the back (hooked up to the camera here).  So, by having the drive plugged in, you essentially replace the used USB port.


There is a quirk with the DVD drive.  When there is no media in the drive, the keyboard eject shortcuts do not work and you can not access the front button on the drive.  To eject the drive you have to open disk utility, click on the drive and press open.  Now by putting Disk Utility in the dock, opening the drive takes only 3 clicks, however, this is somewhat of a nuisance.  When media is in the drive this does not seem to be a problem.


SOLVED - thanks to fellow modder and iMac enthusiast Jean Luc, I now have an eject icon in the upper right corner, that allows me to easily eject and close the drive in the G4's dome.

This works flawlessly.  It eliminates a flaw of the mini and gives purpose to the base of the iMac G4.

Besides cleaning up a few of the rear ports, this iMac G4 mod is complete and perfect in this setup.  This is largely the same mod as before without the all in one.
The iMac G5 chassis leaves plenty of room for further modification.  It is designed for speakers and its own drive.  Because I have an optical drive in the G4 and use the apple pro speakers, these are likely to be superfluous.  As of right now the Cinema Displays cable goes out where the power cable exited.  So the power brick is outside.  I may internalize this.  While I do like the ability to physically move the camera, I may consider obtaining an isight G5 and seeing if I can get an isight camera and convert it to USB.


UPDATED - with advise from Jean Luc and research I have realized that there is a considerable difference between the original iMac G5 (1st Generation)and the iSight iMac G5 (3rd Generation - much thinner, and with iSight camera/mic).  I am going to attempt to transfer the contents from this G5 to an empty chassis from an iSight G5.  I believe this will likely fit this mod better.  As I have stated much of the iMac G5's shell is currently wasted space, having a smaller, sleeker chassis would likely look better and save some desk space.  Although much tighter, the only contents that will need to fit are the Cinema Display's LCD controller and inverter .  In addition, as Jean Luc explains in the comments below, the iSight is simply a USB device.  With addition of either a USB adapter for the microphone, I can connect these to the Apple Cinema Display's USB ports.  As this leaves only 2 Firewire 400 ports, I would likely either hold off on adding the rear ports to see if my "thunderbolt dock" idea becomes feasible, or use a firewire to usb dock to add USB ports to the rear of the iMac G5.  The RAM access panel at the bottom may also let me bring back the Cinema Displays hardware touch power and brightness controls to the bottom of the display.

FURTHER UPDATED - I have indeed used JLs advise and the chassis of the iSight G5 complete with original microphone and iSight Camera.  Please see this post on the iMac G5 iSight for details. 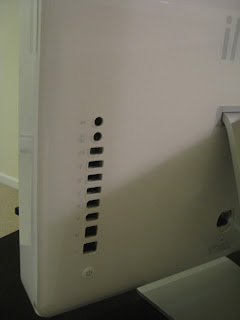 At the very least I'm likely to add the Cinema Display's Firewire 400 and USB ports.  As I mentioned earlier, this monitor is hooked up using a mini display port via the thunderbolt port, I'd love to utilize this fact to make this a "dock".  Exactly as apple has done with its new Thunderbolt displays.  Thus, with one plug I could not only get the image to the G5s LCD but "transfer" the mac minis ports to the easily accessible rear panel of the G5.  This would allow for significant convenience.  I'm hoping such a dock may eventually become available or perhaps it could be taken from a broken thunderbolt display in the next year or so.


In general this is even beyond the setup that I envisioned as a best case scenario when I began this project.
Suggestions are appreciated.  And if there is interest I'd be happy to provide technical details.  Thank you for reading!