First I would again like to thank Jean Luc for his assistance with the camera and the microphone.  I had not expected the iMac G5 iSight (which is the 3rd generation of iMac G5s) to be so radically different from the original G5.  For one it is substantially thinner and the entire layout is different.  Unlike the original where the lcd is contained within the front part of the case, the lcd of the iSight is attached to the back of the housing.  This arrangement leaves substantially less room in the case than the original.  This however wasn't a problem as I was using the same approach I had used earlier with the internals of a 20" aluminum apple cinema display.  Thus, all I needed was the LCD controller and inverter to fit behind the monitor.  The added bonus of the cinema display is that it has one cable that breaks off into power, USB and Firewire and gives you 2 powered USB ports.

Using the Apple Cinema Display's components is something I highly recommend.  I realize that it is not the most cost effective solution, but it is not as bad as you may think.  As the cinema display's control board works with both the native 20" iMac G4 and G5 LCDs and the iMac G4's inverter (probably the G5's as well), you really only need the LCD control board, the wires, and the power brick.  With patience I have been able to get Cinema Display's with cracked screens and dented cases (but working internals) for under $50.  Also, the LCD controller itself is only $30.  Its the power brick that is the most annoying.  But, it is an elegant and stable solution for getting the 24V lines needed to power the 20" LCD and simplifies the wiring tremendously.

Getting the camera to work was quite easy after I found out it was a simple USB camera.  The standard Red, Green, White, and Black cables simply need to be spliced to a USB cable and then the camera is essentially plug and play. 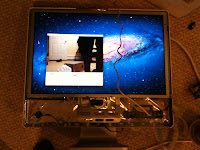 I connected the USB splice to the USB hub of the cinema display which was internalized behind the monitor.

Pictured you can see photo booth running from the camera which is in the top of the bezel.


The existing microphone required a usb adapter.  There are 3 wires which appear to be a TRS (Tip, Ring, Shield) arrangement, like a standard 3.5mm audio jack.   I chose this particular adapter as it stated that it was mac compatible,  though I'm sure plenty will work.  Though I believe this adapter oversimplifies the signal.  The brown wire of the microphone gets connected to the red wire (or ring), while the grey wire gets connected to the shield of the audio cable.  The tip of this (The white wire) was left unconnected.  Plug the audio cable into the USB adapters microphone port and then the adapter into the USB hub and now both the iSight's camera and microphone are operational.

One thing to note is that the existing speakers also can be connected to a TRS cable.  The Right speaker to the Red and Ground and the Left speaker to White and Ground.  This particular USB adapter is not an amplifier so the volume of the speakers was very low when I connected them to the headphone jack/USB adapter.  I am also using the Apple Pro speakers which I am quite happy with.  However, if you do get an amplifier, the existing iMac G5 speakers can certainly be utilized. 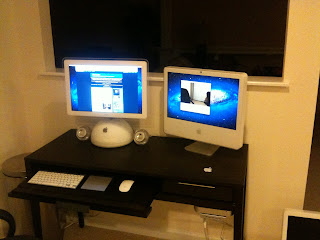 As a side note, as you can see in the picture I have mounted the mac mini underneath the right side of the desk.  The mount is great and comes with four USB ports on the front.

Using this version of the iMac G5 is certainly an improvement.  It is smaller, lighter, and easier to maneuver.  The addition of the iSight camera and mic allows me to ditch the logitech camera that did not really match the overall design.  The addition of the drive to the G4 and now the camera to the G5 allow them to be more than just monitors.  Each of them supplies something that is found on all desktop macs except for the mac mini.

There are certainly things I may tweak in the future.  But, to be honest, this is really about it for this project.  I would still like a touch screen option, but until a reliable, affordable, multi touch capable option that DOES NOT sacrifice the design aesthetic becomes available I am not going to pursue this.  It has been so much fun working with these computers, but using them with the new mac mini reminds me why I did this in the first place.  Both of these are beautiful to look at, have great ergonomics, and maybe this is just because of nostalgia - fun to use.

I am not sure what new projects to tackle next, but I'm sure something will come up.  In the mean time, I'm going to turn my attention to writing step by step guides for some of these mods.  But please feel free to ask any questions or leave any comments.  Again, thanks for reading!!