So the final part of my setup is "the actual computer".  I decided to go with the higher end non-server model.  I would have gone with the server for its quad core i7, but discrete graphics is quite important to me.  I have had some so-so experiences with onboard intel graphics in the past.  In terms of upgrades - I very much wanted a SSD, but for $600, it was not going to happen.  I have spoken to people who have changed or added drives to last years mini (same design) and while not simple it is doable.  So I went with the base 5400rpm 500GB drive knowing that eventually I'll likely add another drive or swap this out entirely.  I did decide to invest in the 2.7Ghz dual core i7 processor as this is something I won't be able to replace later and at $100 the cost wasn't ridiculous.

There was one "surprise" for me, I was not expecting the demise of the optical drive.  While this does cause me to alter my design, it really is not a big deal for me.  That said, I am somewhat disappointed in the decision.  The reason I say that is because it decreases the versatility of the machine.  Plenty of people viewed this as an ideal and elegant HTPC, many of those people have DVD collections, instead of an iTunes movie library.  For the Macbook Air - the initial decision to loose the optical drive allowed the chassis to become even thinner.  In the case of the mac mini there is an empty bay.  The design hasn't gotten smaller and unless you have two storage drives there is simply empty space.  Even if a drive wasn't included in the base model, an option for a Build to Order one would have been nice.  Optical media may not be the future but for many people it is the present and as small as it is, the mini is still a desktop computer.  Obviously, Apple can do what they want and as a huge media digital distributor they have a vested interest in seeing optical media disappear as soon as possible.  But, I thought they could have waited another generation as the people I know who waited for this machine as a living room computer have not decided to go digital, but have instead gone in a different direction.

This does open up some design potential for my setup which uses a converted iMac G4 and iMac G5: 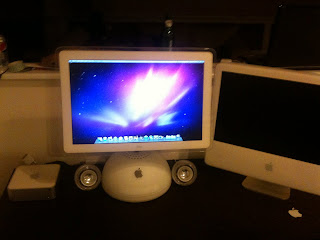 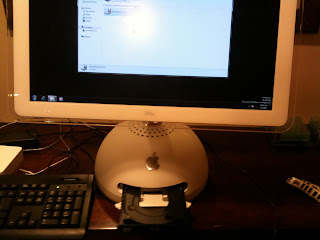 While my initial design included a bluray drive in the base, I took it out as I thought it was redundant with the mini on the desk.  An internal drive was less complicated when there was a computer in base.  As this attached simply through an SATA + PWR connector to the motherboard.  While SATA to USB + Power brick adapters are available, I would like to keep the design as simple as possible.  Meaning I would prefer only one AC plug, no external power bricks and as few cables going between the mini and and the iMac G4 chassis as possible.

For there to be only "1 plug" I obviously have to split power off somewhere.  I can do this on the "AC side" before the power brick or on the "DC side" after the power brick.  I have an old 5.25" external drive enclosure that I have no further use for.  This includes a small power supply and onboard SATA to USB. 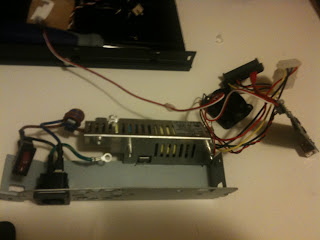 With some internal rearrangement I should be able to fit both the power supply as well as the drive.  Currently all that is in the base is the Cinema Displays LCD controller and Power Brick.  I am hoping to keep the power supplies at the top of the dome.  The drive in the middle and the controller on the underside of the drive.  Leaving the very bottom for some wire management.

Using the Cinema Display's on-board USB ports will allow me to connect the drive and replace the "used" USB port with one that will be on the back of the iMac G4s base.  In addition I will add either the rocker switch or a push button on/off to the back of the iMac G4 for the drive.  I do have the option of Firewire 400 ports but will probably not hook these up.  Although there is not currently any reliable support for it, I do have a full side 5.25" tray loading bluray drive which has already been modified to fit in the iMac, so I will probably be using this.

Another option is to use the iMac G5 or both.

Of course, as I have previously noted, I have plenty of room in the iMac G5's chassis.  The way I felt this looked the best was to mimic the original look, whereby one cable comes out the back.  So the Cinema Display's Cable comes out the hole n the back, which I will eventually surround with white rubber to make it look as clean as possible.  As a result, the power brick is external.  To use an internal slim slot loading I need an SATA power source (12V), but the power coming in via the Cinema Display is DC at 24V.  In order to siphon off power I need a DC to DC voltage regulator or power supply.  I chose a picoPSU which can use 24V input.  I chose this because it was cheap, small, gives me lots of options, and I am familiar with it.

Using this and a SATA to USB I can again use the onboard USB slots of the cinema display.  And as I am already connecting the Cinema Displays cable to the computer, I may hook up the firewire 400 ports and connect them to the back of the monitor where they were designed to hook up to the iMac G5.

In my opinion one of the most interesting products Apple just launched was its new Thunderbolt display.  The idea that one cable (externally no different than the display cable) can turn the monitor into a "dock" is brilliant.  What would be ideal for my setup would be if they ever sold a separate "Thunderbolt dock".  A Thunderbolt cabe at one end with a mini display port, USB, firewire, ethernet, thunderbolt out (for daisy chaining) etc at the other end.  This would allow all sorts of devices/accessories to be stored in the iMac G4/G5 housing.  An example may be using Macbook Air with onboard Intel HD3000 graphics hooked up to a modified iMac G4 or G5.  But inside of the iMac enclosure is not just an LCD but a powerful PCI-Express graphics card hooked up via thunderbolt (I know it wouldn't be fully x16 - but it would still be very capable) as well as a 3TB HD array and Bluray drive that all becomes accessible as you hook one cable up to your laptop.  It really may make these mods more than just monitors.
Posted by JBerg at 3:43 PM