There are a few "extra" features of the iMac G4 that I have gone to great lengths to incorporate because I felt that these were important to the design of the iMac.  One of these is the optical disc drive.  Although this is no longer a critical feature and it uses a huge amount of space in the dome, the disc tray emerging from the oval slit in the otherwise featureless dome is something I always associate with the iMac G4.  Similarly, the apple pro speakers, sometimes called the orb or eyeball speakers falls into the same category for me.  Other speakers just don't look quite right next to the iMac G4.  I had always known that the apple pro speakers had a proprietary connector (the apple mini-jack) and lacked an amplifier in the speakers themselves, but I didn't realize exactly how they worked until I was completing my most recent project and decided to incorporate these speakers.  I had been lucky to obtain both a Griffin Powerwave and a Griffin iFire which accept the apple mini jack and never gave this connector much thought.


One thing that made iMacs appear more elegant was the lack of "cable mess".  Steve Jobs talked about this frequently and this was one of the reasons that he so greatly favored all-in-ones.  Included in this was AC adapters/plugs.  It makes sense, why should computer speakers need another cable for AC power to power an onboard amp (complete with its own powerbrick for DC conversion) when you have a power supply in your computer and a cable already connecting to it. You could either have the amp in the computer and then output the amplified sound to the speakers or keep the amp external, but use the computers power supply to power it.

These speakers, designed by Harman Kardon, appeared with the G4 generation of PowerPC Macs.  The G4 Cube seem to contain an external amp in the small box that closely resembles an ifire (likely secondary to space constraints of the cube's chasis).  This then connected to the computer via USB for both power and connection.  The USB port, however, was a special port, with a higher voltage (standard USB is 5V) required to power the amplifier.  This makes sense to me and although these speakers were not compatible with standard USB, this was necessary to power the speakers and still keep the design simplicity that was characteristic of apple.
For the Powermac G4's speakers (The Speakers with the Dark Circle) and the iMac G4 (The Speakers with the White Circle) apple introduced the apple mini jack connector.
At first this appears to be a 2.5mm plug.  The 2.5mm is simply a smaller version of the standard (3.5mm) Audio Jack.  These use a TRS (Tip, Ring, Sleeve) method for connection.  Looking from Top to Bottom, the Tip supplies the L channel.  Then there is a separation (see the white band below the tip), followed by a metal band - the Ring, which supplies the R Channel.  Then there is another separation, and then more metal which is the Sleeve.  The Sleeve is the Ground which is shared by both channels.
However, with the Mini-Jack, at the base of the plastic part of the connector there is another metal piece not seen on the 2.5mm connector.  I had initially thought that this was there to provide a mechanical obstruction for use with other devices.  Similar to the original iPhones headphone jack which was recessed making compatibility with other headphones limited.  However, this is much more than just a physical barrier.  Closer inspection reveals another difference.  There are 4 metal areas on the inner pin for the minijack (separated by 3 white bands) as opposed to the 3 metal areas (separated by 2 black bands) on the 2.5mm which correspond to Tip, Ring, Sleeve. 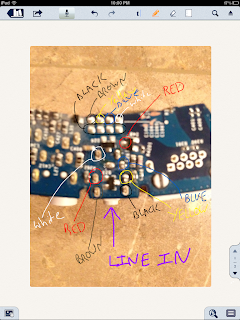 For my project, I wanted to make it as similar to the original iMac G4 as possible.  To do this I had intended to internalize the griffin powerwave's board with the DC power hooked up to the an internal 12V line.  However, this board was a tight fit and I already had a USB audio adapter for use with the internal microphone and did not want to add a second.  So I opened up and tried internalizing the smaller Griffin iFire which connected via a standard 3.5mm audio jack and FireWire.  Although my computer did not have a firewire 400, this is used only for power.  So I connected this to the internal 12V and hooked the iFire to my turtle bay usb audio adapters headphone port via a 3.5mm cable.  Unfortunately the shape of the board did not lend itself to sit flush against the round rear ports of the iMac.  Although Griffin made an extension cable for these speakers, it seems to be long extinct.  So, using the port on the original iMac's motherboard, I fashioned an extension cable.  I cut the connector from a broken set of Pro Speakers and was surprised  to find 6 wires, instead of four wires. It seems that the ring on the base (the black wire) and the extra connector area on the pin itself (the red wire) are used to send some "signal" in addition to the 2 channels (white/blue and brown/yellow).  I then used a multimeter to find where on iMac's port each wire connected to (I used the connections at the bottom of the picture.  The solder points on top in the picture that I labelled indicate where these connections were routed next. 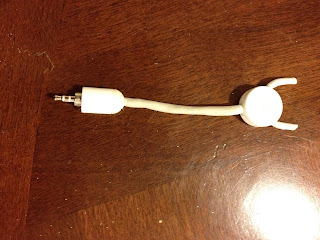 I noticed that above the "Circle" only 4 wires exit, 2 to each speaker.  But 2 wires terminate in this circle (blak and red).  Inside of this plastic circle is a very small chip from which the wires to the orb speakers themselves emerge. 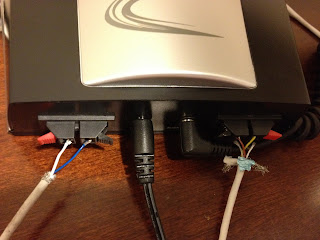 This seemed way too small and simplistic to be any type of circuit necessary for alteration of the audio itself.  After some research I realized others had come to the same exact conclusion that this is simply a "gatekeeper".  If the proper signal from the 2 additional wires does not reach this chip, the audio signal in the other 4 wires will not be allowed to pass through.
Cutting the circle off and connecting the individual speakers to a small amplifier, 10 - 20 watts, then connecting the amplifier to the computers audio out port resulted in crystal clear audio which is indistinguishable from the audio that is produced by sound that went through the "circle" and mini jack. 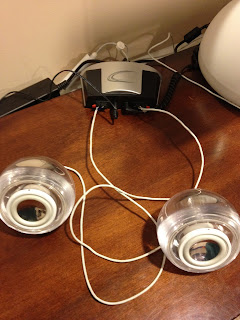 It turns out that due to power limitations of my power supply, I started to see signs of strain (USB ports not working etc) when I hooked up the ifire to a 12v molex (via the power cables in the firewire) internally, so I decided to scrap internalizing the speaker connection.  I thought it was interesting that this $20 mini amp pictured here sounded exactly the same as the sound from these speakers when the iFire or Powerwave provided the amplification via the minijack connector.
When I looked to see what the cost of these long discontinued items are online, I found that the asking prices are even more outrageous than when I grossly overpaid for these several years ago.  Used iFire's (initially $40 or so) seem to go for as much as $300 and the Powerwaves $200+.  For anyone who wishes to use these speakers with a different computer, simply cut the speakers free before the "circle", strip the 2 wires, and connect it to a mini amp.  If you already have an iFire or Powerwave, there is no reason to do this, but buying one for as astronomical amount is not worth it.

In retrospect, this is one of most unnecessary, frustrating, proprietary features that I have seen apple incorporate for very little reason.  It seems that apple went to a lot of trouble to make sure that people could not use these speakers with non-apple hardware.  I completely understand why they did not add an amplifier to these speakers. By keeping the amp internal they simplified the setup allowing for completely translucent speakers to be connected via one cable to the computer without the need for another AC plug.  Putting the amplifier in the machine itself makes a lot of sense, but for the few owners who wanted to connect it to an external amp to use in some other fashion, why create a whole new connection, add an unnecessary chip etc to stop them? Its not like Apple felt that these belonged only with the iMac G4 as they were incorporated into the Powermac G4 and Apple Cube as well, both radically different designs.  These were even designed outside of Apple and whats more - Apple itself stopped supporting the MiniJack in its very next generation of computers, the G5's.  A simple google search reveals countless forums and discussions where people from 2003 til now search for ways to reuse their apple pro speakers.  In addition, most people just want to use them with their new iMac or Macbook.

For those interested, however, a cheap amplifier and stripping 4 wires is all you need to free your apple pro speakers from its ridiculous proprietary mini jack.
Posted by JBerg at 12:27 AM