While the previous Sandy Bridge Mod worked fine, this board is simply a perfect fit.  It runs cooler, uses less power, keeps the optical drive, supports mountain lion, uses the native PSU (which not only ditches the external power brick, but it even provides 30 extra watts of power).  This is much more stable.  Only S3 sleep (S1 works fine) remains a problem.

The two extra additions are the 12V to 19V upconverter, which powers the actual motherboard. 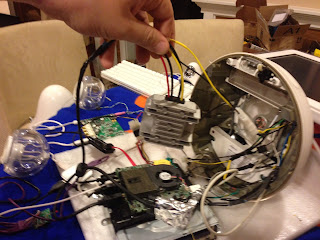 and the Wide Input PSU, which allows the peripherals (The optical drive and the Fan) to turn on only when the motherboard is on and activates the PSUs 24V line via its 5V switch.  Both these fit (although its tight) and work perfectly.

With the exception of some cosmetics, I have completed the back ports.  They include 4 USBs, though 1 is used by a small Bluetooth adapter, a 3.5mm audio jack, the native AC power plug, and a "fake" Firewire 400 plug.  Its fake because it isn't a true firewire cable, it is only connected to a 12V Molex/Ground, so it supplies only power.  This is for use with the Griffin ifire adapter which gets its power from firwire and its signal from a 3.5mm audio jack and has an apple minijack out for the apple pro speakers.  This is very much akin to the original apple pro speakers that came with the G4 Cube.  They used an external amp which plugged into a special "high voltage USB port".  So although the speakers are not directly plugged in like the original, with the iFire, no additional power source is needed.  I did not want to break open and try to internalize the iFire.  This would have wasted the valuable iFire and constrained this mod to only those speakers.  The iFire also allows lengthening of the speaker cable, which is far to short on the apple pro speakers. 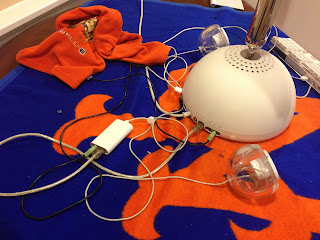 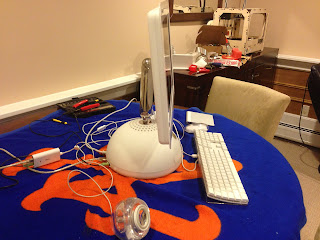 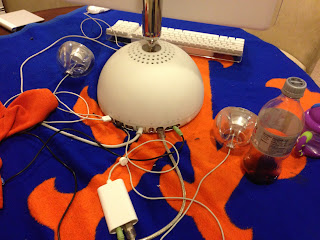 Other small improvements include:
Using KeyMap4Macbook to allow the keyboard button to eject the SATA to USB drive.

Changing the Mac Mini Pic in Resources to the 20" iMac G4, so the iMac's pic displays in "About this Mac".


I will do a video shortly and am hoping to combine old pictures and new pictures into a comprehensive guide for doing this, including parts list.

Almost all the shortcomings of my previous mod has been addressed.  I am really pleased with this and hope this is helpful to others interested in this mod.  Thanks for reading!

Posted by Dremel Junkie at 3:57 AM