Although this has been a great hobby for me, my goal has always been to produce a computer and setup which allows me to use the form factor of the iMac G4 with modern hardware and the Mac OS.  As you can see from my summary, most of my mods - besides the black iMac/VESA - have been disassembled for parts as I feel that the mods have gotten better and I simply don't have use for that many iMac G4 hacks.  The fact that I have completed a 20" all-in-one iMac G4 complete with ports and a blu-ray drive using the ECX core 2 duo board shows me that this mod is doable. The only negative is problems with snow leopard (and presumably Lion) with this board.  However, there should be no compatibility problems with the new Sandy Bridge KEEX-6100. Still, I have expressed my reservations with hackintoshes in the past and I would prefer a true mac.  So while I have been using my touchscreen iMac/Cinema Display mod with my old mac mini, I have really come to prefer the appearance of my newer mod, the native iMac G4 all-in-one mod.  So after filming a video of the all-in-one mod and much deliberation, I decided to disassemble this mod and "switch" this mod with the apple cinema display one.  Thus, I will get the benefit of a brand new/white exterior and the native housing which makes this completely indistinguishable from the original iMac G4.  I will however loose the touchscreen.  I simply felt that this came closer to what I originally set out to do.  For myself I do not mind the small footprint of the mac mini being on the desk as well.  Plus, this leaves open other possibilities such as using it as a desktop monitor for my Macbook.

I did decide to make one additional switch.  Although the mod works fine with the original iMac G4's LCD - the apple cinema display's LCD has a better contrast ratio, viewing angle, brightness, and response time.  I had an extra apple cinema  LCD (which was intended for the mod detailed later in this post that I ended up not needing).  So I replaced the iMac G4's LCD with the Cinema Display's.  Here you can see photos of the new iMac G4 hooked up to the mac mini and apple pro speakers via the iFire adapter.


I left out the bluray drive (as Mac does not yet support it), but now have plenty of room for the power brick which is now included internally.  So only a DVI out and C14 Plug is required on the back.

My ideal setup has multiple monitors.  Unless I have a 27" screen - I find having the extra screen real estate important for multitasking.  At first I considered two iMac G4s but thought that may look odd.  So I decided to add my second favorite iMac design of all time - the iMac G5.  I obtained a broken 20" iMac G5 in good cosmetic condition and removed all but the lcd itself.  I had an extra apple cinema display with a broken screen - I put the cinema displays components around the native iMac G5's lcd (which luckily still worked) and I now have an external monitor in a G5 shell.  For now I just wired the cinema displays cable out the back where the C14 plug used to be.  There are still some issues to work out such as the monitor now being very light.  Also, the screws in the bottom no longer fasten into anything.  And, I do plan on wiring the 2 USB and Firewire 400 inputs of the Apple Cinema Display to make them accessable on the rear panel of the G5.  I know I did not go into detail on this mod - as there really isn't much to it.  Just know that the native iMac G5 panel works with a cinema displays controller board.  If anyone is interested in this, please let me know and I will add a step by step and parts list.  And if you are wondering why I didn't use the TMDS to DVI hack, its because I would still have to power the iMac G5's inverter which also requires a 24V line.  Sure, the iMac G5's power supply could be altered, however, the power supply on this was broken and I had the cinema display components. 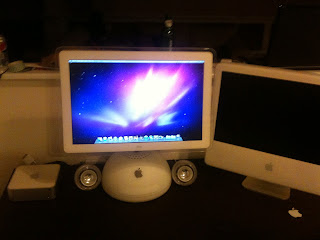 Unfortunately, my mac mini does not support dual monitors (the current one does).  I am hopeful of a new Sandy Bridge mac mini which will be the centerpiece of this setup.
So first the iMac G4 connected to the mini. 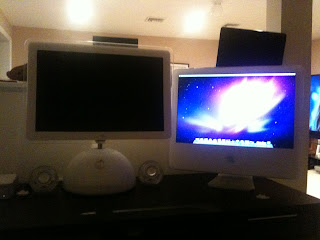 Then the iMac G5 connected.  And hopefully in July...Both!


As always comments, questions, and suggestions are appreciated.  Thanks for reading!
Posted by JBerg at 11:28 PM