The second method is to use the existing wires in the iMac neck and solder them to the Cinema Display Connectors at each end.  (With one notable exception).  To start I removed all the protective tubbing from the cinema display cable.  The cable is composed of 4 separate wires.

1) The Power Cable - 3 wires - including 24V
2) The DVI cable  -  This cable actually splits into two parts on the monitor side of the cable
A) TMDS Signal Wires - The equivalent of the black cable of the iMac - 4 triplet wires = 12 total
B) TMDS Power/Data/Clock - The equivalent of the gray cable.  This contains the clock, data, hot plug, EDID, and ground.  There are less cables than the grey cable because the power (VCC and ground cables) come off from the lcd controller. 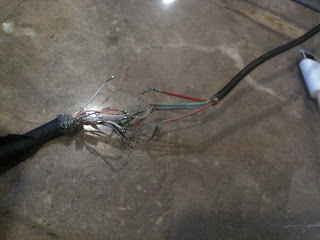 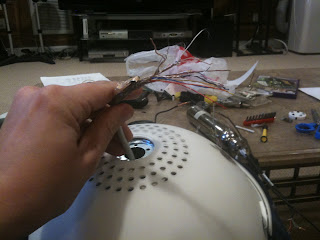 As I showed in my previous post, I didn't believe any existing wire was similar in gauge to the power cable, so I did have to open the neck.  I removed the microphone/LED and replaced it with the similarly sized Cinema Display Power Cord.  I then spliced the DVI cable to the existing iMacs Black and Gray cables.  As there are 4 extra wires in the iMacs grey cable I used those for the USB.  So the inverter cable is unused.  So if you need the room it can be discarded, but I am hoping to use those cables for the touch screen.  Remember to put the DVI end in before soldering the connector can not fit through the hole in the top of the base. 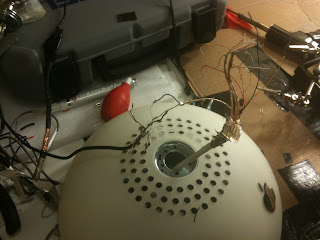 In essence I simply cut the Apple Cinema Display in half and spliced the iMac Cables in the neck between them.  With the exception of the USB cable, I used the iMac cables that were meant to carry that very signal.  Meaning I spliced the Clock to the clock, EDID to EDID etc.  The most important thing is to write down which wire you spliced to so you can correctly match the wires back up on the other end.  Knowing the function of the wires is useful, however, for troubleshooting purposes.  The guide I used is shown below. 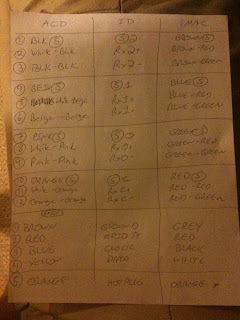 Having done both methods, I would recommend using the splicing method.  The reason for this is that although there is more soldering, you end up with a surplus of wires.  Thus, if you want to add firewire capability, a touch screen etc.  you have that option.  Also, it is easy to damage the neck when trying to force the extra wires through.  Testing it out: 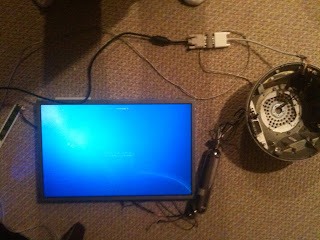