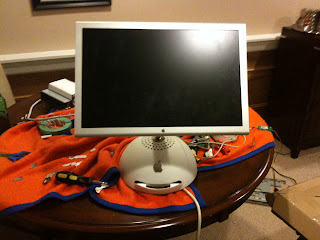 This is without the front bezel of the iMac G4 on top of the apple cinema display.  The bottom is also not on as I am now working with the components in the base.

The touch screen does not fit inside the monitor housing.  Because, I want to make the touch screen removable, I originally had the controller inside the casing and sacrificed a USB port internally.  However, the touchscreen could not be removed without taking the entire monitor apart.  So instead I bonded it to the iMac's Front bezel to make sort of a USB Touch Screen Overlay. 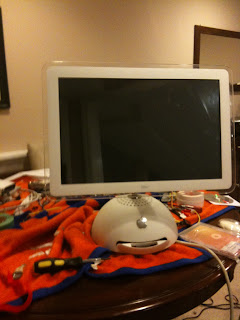 With the touch screen and bezel in place 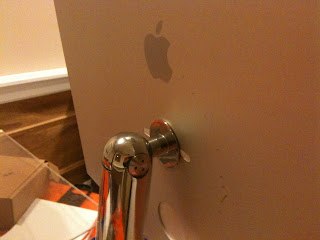 Unfortunately, the VESA mount method does not work with the cinema display.  Although the weight is identical to the native iMacG4's monitor, the VESA mount displaces the monitor forward about an inch.  This puts too much pressure on the neck and the monitor will not stay up.  By putting the neck directly into the back this problem is eliminated and it moves exactly like the native monitor.  To finish it off I sealed the holes using gray styrene 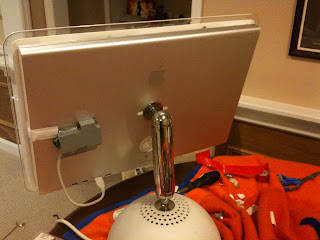 I came very close to painting the back white.  I do think doing that would make it nearly indistinguishable from the native iMac G4s monitor.  But, for now I held off. 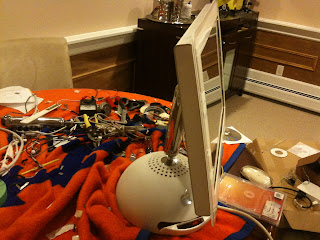 Obviously, this isn't the native iMac, but it is pretty damn close.  Unlike the TMDS to DVI 17" mod, I don't have to deal with screen corruption during sleep.  To use the original 20" inverter I would have needed a 24v, 12v, and 3.3v power source - for the monitor alone.  The backlights would have been turned on independently - which is somewhat inconvenient.  I still do need the power brick, however, which I may not be able to fit in the base.

I am very curious to hear opinions and suggestions regarding how to improve this mod.  When I am finished I can post a parts list, step by step guide if anyone is interested.

Next step: I am going to complete the alternate neck wiring method I described in my previous post.  I may paint the housing white.  I also need to decide how I'm going to handle the touch controller, make it look clean, but keep it very easy to remove.

In terms of the base, while the ECX board can boot off the compact flash, its onboard graphics is unable to drive the 20" monitor.  As a result, I will need a dedicated graphics card.  Because it has only a PCI x 4 slot, I have decided on the Zotac Ion PCI x1 card.  With a pci riser it should still fit, but its starting to get very crowded.
Posted by JBerg at 11:41 PM