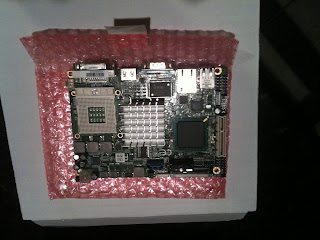 OK - I thought it would be the answer to all the problems of this mod.  But, the ECX for factor has been nothing but a disappointment.  As it is the size of a 3.5 inch drive, contains a core 2 duo processor, and is able to boot from an onboard compact flash drive, i thought this would easily replace the existing hard drive in the iMac G4s current design and thus, I would be able to keep the dvd drive and have the entire bottom of the base to wire up ports.  Unfortunately the onboard intel "HD graphics" may be HD, but only display at minuscule resolutions.  So, it does have a PCI express x 4 slot, however x1 and x4 cards tend to be overly expensive for what you get.  The biggest problem is that a graphics card, even low profile with a riser makes the setup almost as big as a Mini ITX rig - but much less powerful.  So after advice from posters (thanks Tobi) - I have decided to go the mini itx route instead. 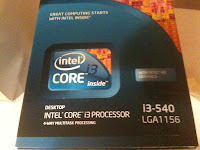 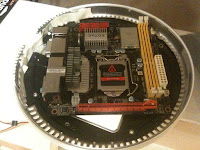 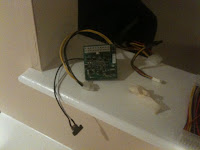 So here is the Zotac Mini itx LGA 1156 board with the Core i3 Processor.  As I have mentioned before, I am very concerned about heat and stability issues - this hasn't changed.  What has changed is the price.  The core i3 offers decent performance for the price as does the itx board itself.  So, if something does "go wrong", it wouldn't be as devastating as it would have been several months ago.  In addition, I have heard favorable reviews from heat/power as well as performance regarding the i3 on-chip graphics.  I am hopeful with good wire management, the on board graphics, a pico itx power supply (200W pictured), keeping all power bricks outside, and a solid state drive, I can minimize heat and keep this board ticking for a while.  The board fits at the right angle, however, the DVI plug can not fit, so I had to use a DVI to HDMI and STILL had to use a right angle HDMI connector to fit.  Likewise USB plugs are a tight fit and small connectors are preferable.  As a result of the taper of the dome as well as the "nooks" of the metal faraday cage - there is substantially less room inside the dome than there appears to be.  Fitting in a full size drive is impossible, a slot load may be possible, but doesn't work with the drive door.  Also, do not discount the room that connectors and wires take up.  I have also replaced the existing fan with an atx compatible one. 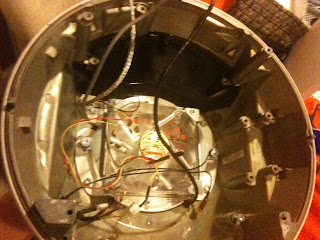 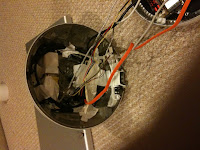 I have spent the past day or two trying to develop a mechanism to use the drive door.  I have several touch latches that I've been trying to work with, such that you push on the drive door and it pops out a little allowing you to pull it down and expose a card reader.  While I did get it to work, the mechanism required the drive to be "pushed out" a little at baseline and took up a lot of room.  In the end, I decided it was simply not worth it.  I want to give as much room to air flow as possible and keep the base simple.  An SD card reader can be placed at the back.  Instead I secured the 60GB solid state 2.5" inch drive just inside the drive door.  This will allow me to take a flat screw driver to pry the door open to have easy access to the drive for easy swapping. I am trying to remember my own advice that less is more.  Everything that takes up room, impedes air flow and is something that could potentially go wrong requiring having to reopen everything.  As a result of the faraday cage the itx board has to be put in at an angle - so none of the existing screw holes line up with anything.  So, I'm finding myself using a lot of twist ties, velcro, and electrical tape - I'm hoping to replace some of these with brackets when possible, but nothing is fitting easily. 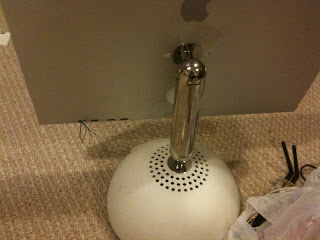 I replaced the neck with my new hybrid neck (see wiring the neck post for details).  I hear none of the "grinding" that worried me about the last neck.  I placed the screen in and because I used shorter wires - it fit perfectly and closed easily without any force.  The small wires you see coming out of the first firewire port are actually for the touch screen.  Because I had extra wires using the "hybrid" method, I was able to place the touch screen controller in the base.  This won't use up a USB and now I don't have to put the controller on the back of the monitor, but I did need a place for the connector to go.  As, I'm not using the firewire ports, I dremeled one off to allow me room to fit the wires out.  I'm going to place a female connector there.  Then fashion a short 5 wire male to male cord to connect the touchscreen.  I'm hoping to keep as much as possible on the bottom edge of the monitor, but either way I feel this is a more elegant solution than a clunky controller on the back, but still allows me to make the touch screen easily removable. 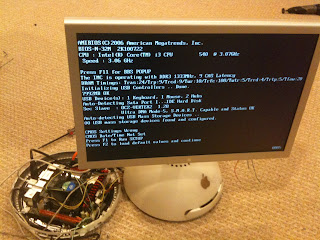 This was supposed to be the first sealed test of this mod.  Unfortunately, I closed it up, confidently pressed the power button, but nothing happened.  I had to open it up where I found that I had mistakenly put the power switch on the power led pins.  So, as it was getting late, I left it open and performed the inaugural boot - which was successful. 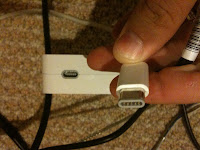 I have purchased a few types of modeling clay which I plan to use to make/secure the rear ports.  On the back I plan on having, a Bluetooth, the zotac's wifi bracket and antenna, 3 - 4 usb ports using internal wifi headers and usb male to female, a usb to sd card reader , the dc power for the mobo, ethernet, microphone and audio out (via either internal header or male to female rear plugs).  I have already physically secured the power button to the existing imacs button.  Right now I have the monitor power cord simply coming out the back (pictured on right).  Ultimately, I would love to find some type extension so that I can have a female plug on the back to plug the power cord into.  However, I have not been able to find a female version of this cord.  This is the same one on the Mac Mini, does anyone know if something like this exists? 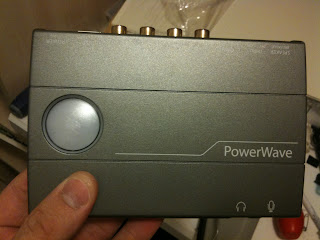 Then, mount the front bezel and touch screen and finish the touch screen connector.  It's really coming together and this is my favorite mod so far.  Ironically, the very first thing I tried was the VESA mount mod on this very apple cinema display.  I only even went the itx route on advice from a reader of my blog, so I'm looking forward to advice, comments and questions.  Thanks!!
Posted by JBerg at 7:18 PM