So That Only Took Me A Year! It was January 8th, 2011 when I documented in this post on my blog my frustration with the 20" inverter and my inability to get it to enable the backlights on the native LCD in any kind of reproducible way.

I believed that the LCD itself would not pose a problem and I posted the TMDS to DVI pinout in this post, though had not been able to confirm it until now.  And yes it does work.

I had devised a work around using the LCD controller from the 20" Aluminum Apple Cinema Display, the mod was shown in this post.  The controller worked perfectly with the iMac's native inverter and LCD (with one addition).  This mod hooked up to an external mini has become one of my most frequently used computers.  It has several advantages in that it is VERY STABLE.  The reason its so stable is that it really is an apple cinema display masquerading as an iMac G4.  While aesthetically perfect, I am reminded of this every time I open the display preferences and Cinema Display is shown in front of me.  As a Computer User - It's the perfect solution.  As a Computer Modder - I felt somewhat defeated, in that I wasn't able to solve the problem.  But there was another problem, this mod was complicated.  The neck had to be rewired and components from an expensive cinema display had to be used.  I knew that this mod could not be easily replicated.

When I finished my 17" STEP by STEP GUIDE.  I knew I was going to get questions regarding to 20" and if such an easy approach could be used.  However, because of my cinema display mod, I now had information about the inverter that I had previously lacked.  I have never owned a working 20" iMac G4 and was therefore making (supposedly) educated guesses, while trying to figure out the inverter.  A damaged inverter later, I realized this approach was not great.  With a working inverter via the cinema display's controller, I finally had voltages to check and use as a guide.

So, using my new technique, once the pins were free (The LCD was wired up in just a few minutes).  I then tried a few different things using my new information.  And for the first time I had a 20" iMac G4's native LCD and inverter display a backlit video signal through the neck (hooked up to a mac mini via DVI) using only wires, connectors and power supplies.  The power scheme is much more complex than the 17", this is due to the higher power requirements of the 20" LCD.  However, this uses the same method for the LCD as the 17" mod and is quite reproducible.

For those who have followed this blog, you know that this has always been a frustrating shortcoming for me.  It has been a long time, but I am so excited to be able to share this with everyone. 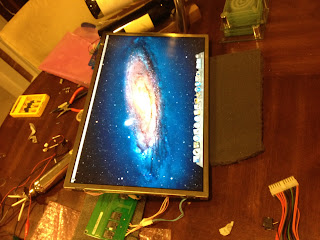 Needless to say, I will be posting a step by step guide for this.  And this mod will be done to completion.  In addition, I believe that I have now found a home for my KEEX-6100.  This will now form the backbone for a new iMac G4 20" All-In-One.  I intend to document the process, including adding the computer to the base for those that wish to do something similar.

Again, thanks for reading!
Posted by JBerg at 12:05 AM