First let me start off by saying that I did something very stupid despite me writing not to do this time and time again.  I soldered the DVI connector on without putting it through the hole in the dome.  So I had to cut and resolder and for those of you that have never seen the components of the black wire of the imac neck, I can tell you it as an absolute nightmare.  They are composed of 4 wires in which are 3 wires; a red (+), a green (-), and a ground.  The red and green wires have a small plastic coat surrounding a single wire that is the size of a hair. When I set up this initially I had the bottom pins on and was able to use a tiny dab of solder, having to resolder these tiny wires, wire to wire has caused signal problems.  Keep in mind even one failed connection will give you no image whatsoever, so a multimeter is very helpful.  But poor connections or poorly shielded connections will result in color distortion. 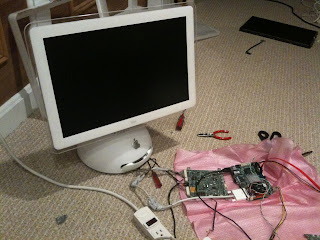 That said there is some very GOOD news.  The native LCD for the Apple cinema display (LM201W03) needs to be modified to fit and although it fits, I decided to try the native iMac G4's (IDTech 20.1") lcd glass and it also appeared to work (though until I have a perfect image I can not confirm this 100%).  So it is possible that the only thing you may need is the LCD controller board from the apple cinema display and the cable to get this mod to work as the native G4 inverter has been confirmed to work and the native LCD glass appears to work.  This would be quite helpful as you can use a broken cinema display with a cracked screen. 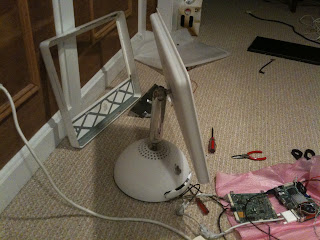 To the right you see the mod to date.  The top monitor housing closes as easily as the original as it uses the native inverter and the native glass.  Because I wanted this mod to be as close to the original as possible - I actually purchased a new monitor housing and base cover from ebay as most of the broken used iMacs I have acquired tend to be yellowed or scratched.

You can see the monitor from the front, side and back.  To the right of that is the lcd controller and ECX motherboard.  The ECX boots from a compact flash card located on the underside of the board. 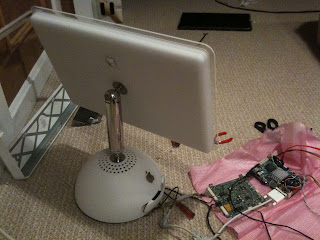 The ECX board is the size of a 3.5" drive.  My plan is to mount the ECX board on top of a blu ray drive in the native drive caddy.  (essentially taking the place of the native hard drive).  As the CPU fan will be sitting at the top of the dome, I will not need a fan, so I should be able to fit Wifi and Bluetooth at the top of the dome with the vent holes.  As I will not be using the native power supply I should have room around the ECX board to fit connectors.  The lcd controller board will replace the native iMac G4's motherboard at the bottom of the dome below the drive.  As its smaller than the native motherboard I'm hoping to have room to wire up some rear I/O ports.  The only downside is that this leaves no room from the power supplies for both the monitor and ECX board.  They would fit in the drive caddy and using a splitter a simple AC plug could be placed in the back, but then obviously there would be no drive.  I have thought about using the native iMac's power supply, but I really need the room and in a similar experiment I fried a different ECX board in the past.

So, I'm going to keep them external.  For one the power supplies are small and this is a desktop computer, it won't be moved that much.  Plus, I have always loved the drive and by using blu-ray it can be useful.  Also, its gonna be tight in there and there is really no cooling system in place - so keeping hot power sources external is probably for the best.

I do think the system is likely to be hackintoshable - the chipset has been hackintoshed before (this is the Quanmax KEEX-4030 ECX board for those interested).  The thing that I have never heard about is booting snow leopard from a compact flash card - a 2.5" or even 1.8" SSD may have to be shoehorned in somewhere if hackintosh is your goal. 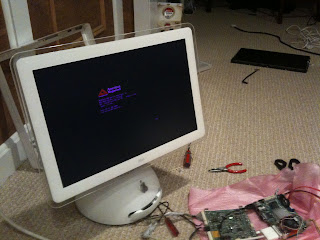 Here is the system booting (again notice the small resolution during the boot that I previously discussed). 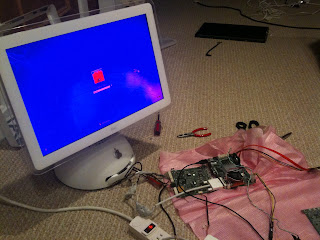 This is where the frustration set in - with windows booting.  While I previously had a pristine image, after the resolder, the colors are unfortunately off.  A multimeter revealed all intact connections but I was getting some week noise at the wrong pins - so I suspect some interference or crosstalk.  I'm going to remove all the solder joints for the black wires and try redoing them with fresh connections and extra shielding.

To do this mod, I actually used cables from the necks of different iMacs.  There are the black and grey cables that carry the DVI signal, however the apple cinema display has "extra wires".  Some of these probably aren't necessary, but some of them are.  As a result, I had to add an extra grey wire from a different iMac.  I replaced the native LED/Microphone cable with this wire.  The wiring is somewhat difficult to explain.  If I continue to have difficulty with the black wire of the native iMac, I will likely change it to a different wire.  Likely either the equivalent wires from the apple cinema display or another grey wire.  Both of these choices would be MUCH easier to work with.  Either way when I do finalize how I wire the neck, I will post specific instructions.

While I am quite proud of some of the previous mods - this mod is actually much simpler and besides having to push some wires through the neck, a lot less labor intensive than previous mods.  In addition, if it does turn out, as it seems, that either LCD panel can be used, combinations of discarded iMac G4's and apple cinema displays can be used.  I would NEVER tear apart a working iMac G4 and couldn't bring myself to tear open my mac mini to try to fit it in the base.  I even hated even using a working apple cinema display in my previous mod.  Its always great to re-purpose otherwise useless parts.  But whats great about this mod is that there are so many different ways, but this one feels the closest to the native 20" iMac G4 that I've come so far.

Keep in mind that the KEEX-4030 uses the same Socket P Penryn Core 2 Duo chip thats in the previous and current generations of minis.  This ECX board is no slouch.  That said, if there was a problem with it, I think this is the mod that I would open up a mac mini for and try to put it in the base.

I'm hoping to figure out the wiring, clean up the image and start putting the base together this weekend.  But, as always all comments and suggestions are appreciated, but please no comments about seeing windows on the iMac G4 - Its the only operating system I currently have on a compact flash card.  Also feel free to ask any questions.
Posted by JBerg at 11:45 PM