Although I thought the previous 20" iMac G4 / Apple Cinema Display came out very well and it has become my most frequently used desktop, there were compromises that I had to make.  The two biggest ones were externalizing the computer (abandoning the all-in-one concept) and using the external housing of the apple cinema display.  While I think it looks good, it still is not the classic 20" iMac G4.  While working on a different mod, I realized there are two things I overlooked while designing and building the previous mod that would allow a genuine 20" iMac G4 all-in-one with an updated intel processor. 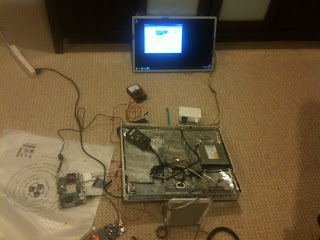 I was working on a project which involved using some of my spare components with a broken shell of an iMac G5.  These were mostly unused pieces from my iMac G4 mod.  This predominantly included a LG LM201W03 monitor from an apple cinema display (although the G5 I believe uses the same panel with some variations).   And the ECX board which uses a P8700 Penryn Core 2 Duo processor (the current mac mini uses the P8600).

As it is the size of a 3.5" drive and it has its own  Compact Flash slot to use as a SSD, I had hoped to slot this into the G4 in place of the existing hard drive and create an all-in-one that even kept the DVD drive. However, when it booted it would not display at the required 1680x1050 resolution of the cinema display. 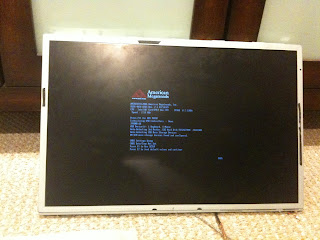 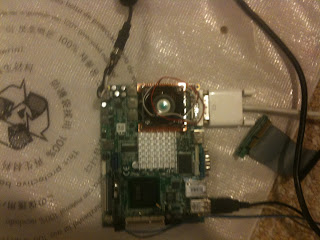 I was wrong.  The ECX board can support the resolution, it seems to have a quirk with the cinema displaythat it detects it as multiple monitors one of which is a lower resolution.  When I manually adjusted the resolution in windows and turned off the "phantom display", the display became full size. 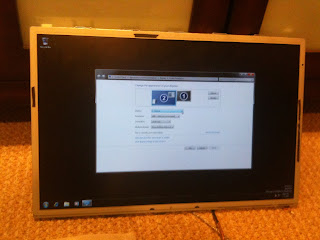 Although I have not minded having the external mini, this board gives essentially the same power as the newest mac mini plus it has 4GB of ram and uses compact flash for a SSD, if its "hackintoshable" - I do not know yet.

I still did not want to alter my old mod in any way that may damage it, nor did I want repeat the same cinema display hack.  I wanted to use the existing iMac G4's monitor housing.  This brings me to the second thing I had overlooked.

I decided to use the Apple Cinema Display enclosure because the iMac G4's monitor enclosure fits the lcd panel and its specially made super thin inverter and NOTHING else.  And I was never able to figure out how to use the native G4 inverter without the G4 motherboard itself.   For the first time I decided to compare the apple cinema display's inverter to the iMac G4's to see if there was any way the cinema display's inverter could fit within the G4's monitor housing.  Thats when I noticed the 8pin connectors were almost identical. 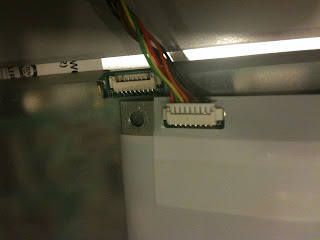 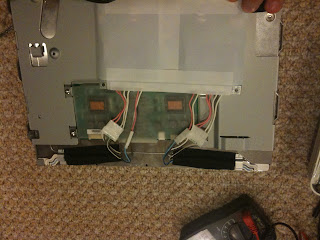 The iMac G4 only uses 7 of the 8pins, however when the one was not connected, it would not turn off immediately when the computer slept, so I will have to make sure I have one extra wire going through the neck to use all 8 pins of the inverter.  To my surprise when all 8 pins were connected it worked perfectly.  If there was any difference I was unable to see it. 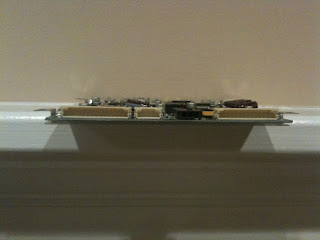 Unlike the inverter whose high voltage cables should not be extended through the neck, there is no reason why the lcd controller can't be placed in the base and its cables extended to both the inverter and LCD panel.

As it is just as plat as the native motherboard which I will not be using it can fit at the very bottom of the dome. 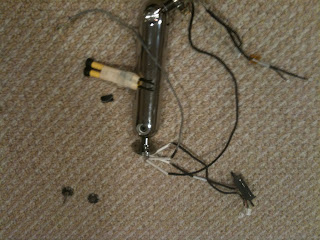 The only true nuisance with this is that although both panels use TMDS signaling, the neck needs to be modified.  The existing Inverter wires can stay, but by placing the controller in the base, there are a total of 27 wires that need to extend up to the neck.  The black and grey wires combined have 22 wires.  Plus I needed one extra wire for the 8th inverter wire, making a total of 28 wires.  To add additional wires, I did take apart the neck and change the microphone, lcd wire to an additional grey iMac TMDS cable that I had from a different neck.  Once I had all the connectors soldered on I was able to put the inverter and lcd on one side of the neck and the lcd controller and ecx board on the other. 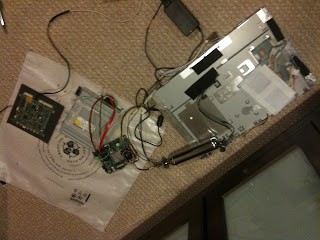 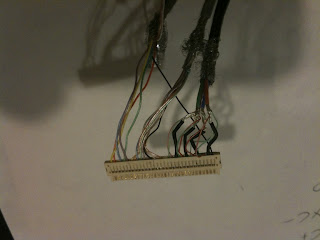 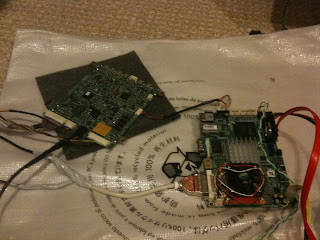 Unfortunately it does not look like I'll have room for both a power source and a DVD/Bluray.  I will be able to fit one or the other.  Right now I'm leaning towards keeping the drive and having a power brick external.  I want this mod to look as genuine as possible, as such I'm forgoing anytouchscreen option.
Powering it on revealed a clear image: 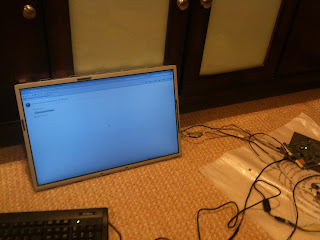 Now to internalize it into an iMac G4 20" shell to see if it will fit.  This is the most hopeful I've been for a genuine iMac G4 20" all-in-one with modernized hardware.
As always, feel free to ask any questions.
Posted by JBerg at 3:54 AM