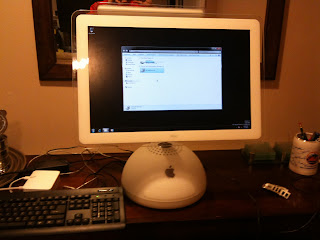 This mod is far from finished but in this test above it is completely sealed up and working beautifully.  This uses the unaltered iMac G4 exterior (base and monitor) and incorporates a Core 2 Duo Penryn Processor ECX motherboard.  What's more is that I was able to spare the disk drive and used a blu-ray drive. 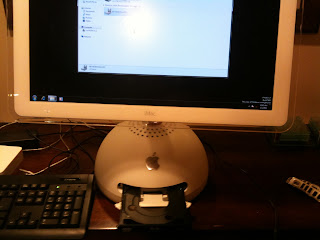 Now its late and I'll have more specifics as I put the finishing touches onto this mod, but to start I'll tell you that the top half of this mod is the native iMac G4 - I used the native lcd glass and inverter.  From the cinema display I used the wiring and the lcd controller board.

As you can see in the picture above the only "flaw" with this design is that the power bricks (monitor and motherboard) are external.  This was done for both space and heat reasons.

The major work for this mod (as is the case for most iMac G4 mods) involves the neck.  As I mentioned in a previous post, because the LCD controller for the Apple cinema display sends out more wires than the iMac G4 motherboard did (27 vs 21), an extra wire is needed.  I used an extra grey wire from a different iMac neck to make up the difference and put in in place of the LED/Microphone wire.  However, partially due to my own mistake, I was having difficulty with the black wire of the iMac G4.  This wire handles the color channels.  It contains 4 wires which are in turn made up of 3 wires (a positive, negative, and ground).  These wires are impossible to deal with, they are frustratingly thin and fragile.  And numerous color distortions I made a decision I would highly recommend.  I replaced the black wire with the 4 individual channels from the apple cinema display.  As you can see, I removed the rest of the cable  leaving only the JAE adapter and the 4 channels with 3 wires each = 12 total. 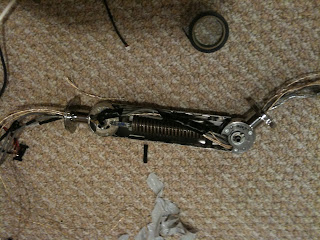 I reopened the neck and in place of the black wire I put the 4 individual channels from the apple cinema display (they are the "gold" wrapped wires).  I was concerned that they may not be adequately shielded, but this has not seemed to be a problem.  So the neck to the right contains:

As the overall size of the wires is about the same - they fit without too much force needed. 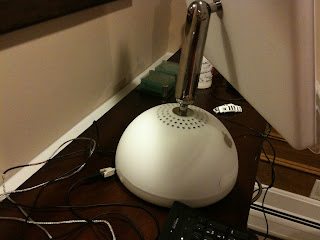 The base I put together very quickly just to test it.  Putting the ECX on top of the drive and the lcd controller at the bottom.  I had previously wired the power button for a different mod, but to test it I just ran USB extenders out the back.  I did put bluetooth at the top of the dome which seems to work well, but the wifi signal at the top is terrible and this may have to be externalized.

Everything is quite loose right now so it will all have to be secured.  The I will wire up the ports in the back.  Likely 3 - 4 USBs, ethernet, and the power for the motherboard and monitor.  But these are relatively small things. 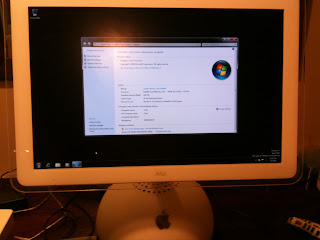 I am also hopeful that the board is hackintoshable, I am not sure about putting snow leopard on a compact flash drive and if anyone has any experience with this - I'd appreciate a few pointers.  When I complete these last few touches I will post a video of the mod.

What blows my mind with this mod is that the goal has been to update the G4 (preferably 20") to a modern intel processor.  I have to admit this one accomplishes that goal better than any mod of mine or that I have seen to date.  Yet, it may be the easiest one to do.  I'm not saying its simple, it does involve opening and rewiring the neck and soldering.  I realize the cost in obtaining the ECX board, the iMac and the apple cinema display components, but if you have the equipment, this can probably be done in a day or two.  I'll post a pinout in the next few days to show exactly how I wired it up, but in the meantime please feel free to ask any questions.  Thanks.
Posted by JBerg at 3:01 AM