Maybe its nostalgia, maybe its a truly great piece of software/hardware, but I have always loved these machines.  I remember vividly playing photohunt at a local dive bar at a time when touchscreen technology seemed quite futuristic.  With less processor power than an iphone and resistive touchscreen technology that connected via serial cable, its amazing that I still see these machines being used frequently in bars and taverns.

While I don't really know much about the various product lines that Merit offered, I do know that the most common machines I saw were the CRT Merit Maxx (with its jewel themed updates) and the newer Megatouch Force.

I'm putting together a game room and a Merit Megatouch was something I hoped to incorporate right from the start.  At first I looked at the modern LCD versions (such as the Aurora or Ion Lines).  In my opinion, the prices were astoundingly high for the level of hardware.  When I looked at older machines in various conditions, I again saw very high prices and a ver slow depreciation.  This didn't bother me so much, as it gave me an excuse to DIY it and truly make it my own.  Unfortunately, I found out that Merit does not license its software.  Thus, the reason for the high prices is really the software as well as excellent customer support from Merit.

Choosing parts is also somewhat of a pain as Merit is very protective of its software (as is its right).  Buying individual parts requires making sure your hardware and physical security key matches up with the Merit supplied hard drives.  The best bet is to obtain a working machine with defective screen and/or in physical disrepair, but functional inside (easier said than done).


So here is the motherboard:

Its technically and old Megatouch XL that was upgraded to the Megatouch Maxx
I again want to point out (both for my own protection and to state a fact).  This is a native Merit board, HDD, I/O card, and security key (the object with the battery and tag in the lower left corner of the motherboard).  The AT power source is new and replaces a defective one.  This is in NO WAY a hacked board and there is absolutely NO use of cracked or stolen/pirated or otherwise altered software.  Instead this is a genuine Merit Megatouch with some working parts (motherboard, I/O, HDD) and some non-working/damaged parts (powersource, touchscreen, CRT, enclosure) that I am replacing with available alternatives.

There is something very rewarding about repurposing old hardware that is otherwise destined for the trash.  This is especially true with "classic" hardware.  While "classic" is obviously in the eye of the beholder and difficult to define, to me it means, "a device that performs its original function in such a manner that it can not or at least has not been significantly improved upon, even if that function is currently considered obsolete."  With the iMac G4, from a mechanical engineering perspective, it "did its job" perfectly.  It allowed for nearly effortless manipulation of an LCD monitor.  Thus, making it easy to have the LCD conform to all potentially desirable viewing heights, angles, and tilt.  New technology may eliminate the need to change viewing angle to make a screen readable (IPS).  It may/will replace the need for LCDs with superior and more customizable viewing technologies (ex holograms, project glass).  But, if your goal is to have an all in one computer with a 15 - 20" LCD screen viewed on a desk, I don't think it has ever gotten better than the iMac G4.  People who love classic cars would likely say the same thing about their passion.  Similarly, Merit has barely changed the formula and, even in the iPad age, can still sell its touch devices for thousands.  This is because these Megatouch Machines "do what they do" perfectly.  They play simple, entertaining touch games that are both nostalgic and timeless.

A 300 watt AT PSU was easy enough to find for a few dollars.  The touch screen was somewhat of a happy coincidence.  The original touch screen was a 3M and I actually found an old touchscreen controller for this device.  However, I also an old 17" 4:3 LCD touch monitor from ELO.  While I was fairly certain the VGA would scale up easily to 17" from the original 15" CRT, I did not know if the touch screen would work or if I could calibrate it for 17".  I had forgotten that this particular touch monitor had both a usb and serial port option for touch control (I was planning on getting a USB to serial adapter), but did not need it.  It seemed to work, but clearly needed calibration.
I need to thank "Dark Paladin" and his work with Merit Megatouches.  In his project, which can be found here:

He reveals the 4 important pins including the two grounds at the top left and second from left, as well as the setup pin (top right) and Touchscreen calibration pin (second from right on top).  Using a momentary switch to temporarily ground these switches will send you to the Setup and Touch Calibration Menus respectively.  His design is definitely worth a read to anyone considering a similar project. 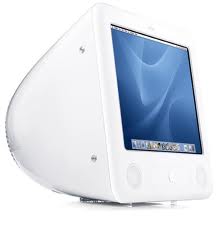 Some issues such as I/O, Sound, and Quieting the fan still need working out.

But the first thing to consider is the permanent housing.  The motherboard is way too bid for the iMac G4 and too wide for the iMac G5.  However, the other white plastic desktop of the era I feel would make an ideal home.  I am referring to the 17" Flat CRT based eMac.  Elimination of the CRT will give plenty of room for the PSU, Motherboard, I/O and HDD.  Cooling mechanisms and air flow are already present in the chassis.  In addition, my current 4:3 17" LCD should fit perfectly.  Despite this transition, because the CRT in the eMax is actually flat, it should be indistinguishable from the outside.

The I/O hub can be fitted with the momentary switches and the existing on/off button can be used.  The existing front speakers seem perfect for this mod.

Although it is bulky, there is a classic look to it and it will allow for a single contained unit.  I have picked up the broken eMac seen above.  The front bezel needs repair or replacement, but it otherwise appears to be in good shape.

All in all, I think this will make a very fun project while I await small form factor Ivy Bridge Boards for my new Pro iMac G4 mod.

Please feel free to ask any questions and as always, thanks for reading.
TO BE CONTINUED ........
Posted by Dremel Junkie at 12:29 AM