When I began this project, my motivation wasn't just to retain the concept of the iMac G4, but to find a way to reuse the LCD screen.  I felt the same way about the iMac G5, and although their Power PC processors had become largely obsolete, the displays were more than adequate. 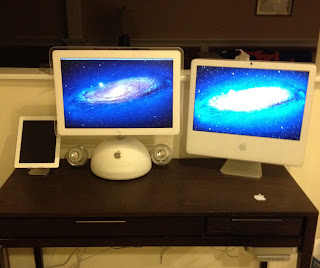 The 20" LCD was almost identical to the one found in the iMac G5 and in the aluminum 20" Apple Cinema Display (these are all TMDS and swappable).  The expansive 20.1" display had a 1680x1050 resolution as a result of a 16:10 aspect ratio.  The iMac G4 contained one of the first flat screen LCDs on an all-in-one computer at the 20" for the first for that size.  Then a funny thing happened, LCD monitors seemed to stagnate in many respects.  LCDs were remarkably sharp compared to CRT Televisions and as computers used small screens compared to TVs, I suppose many felt the resolution to be adequate.  Innovation continued in the form of LED backlighting and increasing screen sizes, but in some ways, resolution seemed to go backwards.

I loved the 16:10 aspect ratio, you were able to see more of the page without having to scroll.  Having the extra vertical room was better for me in almost everything except for one thing - watching movies, an activity I rarely did on my computer monitor.  The extra horizontal space, look up more room on the desktop and went largely unused for me.  For many sizes there was a decrease in the area as well as a lower resolution.  The less pixels required for the same size made this especially appealing to manufacturers and for the most part 16:9 has become dominant.  For 20" the pixel loss was very significant, the 20.1" 16:10 1680x1050 as compared to the 20" 1600:900.  The result is that I have not seen any modern 16:10 20" LCDs at all, though 22" are common.

Higher contrast ratios, IPS screens, LED backlighting can not be found in a screen that fits within the existing housing of the 20" monitor.  What is more concerning is that tablets and smartphones, in particular the retina display of the iPhone and especially the iPad, have changed the way people view LCDs and pixel density is increasing in desktop displays once again.  Although Apple has generally been ahead of the curve with higher resolutions (began in 2009) on their displays, this is now becoming industry standard.

The iMac G4 has 2 features that make great to use - its ergonomic arm and its LCD.  The ergonomic arm is especially useful with a touchscreen.  In my touchscreen variations, I have loved using this design and incorporating a touch screen remains my highest priority no matter which direction I go in.  However, as the LCD becomes more dated, I'm considering trying a radical redesign for my "Pro" Mod.  As of now these are the possibilities as I see them:

1) The 20" iMac G4 mod with some improvements:
- A better cooling system and processor/RAM upgrade
- Native PSU
- Touchscreen
- Possible iSight Cam
I discussed this in my Touchscreen post and I have obtained a 3M 16:10 20" capacitive screen that seems to work with OS X.  It has a significant thickness to it and can not fit inside the housing as is.
The easiest solution is to place it in front of the display or cut the front bezel (the bezel is about the same thickness as the capacitive touch overlay).  This should work and if done properly may not look bad.  I am worried about the weight and ruining the elegant look with a touchscreen jutting out somewhat.  Also,  placement of the controller and wiring down the neck would have to be worked out.

2) LED backlighting
I am currently working on this method and will discuss it in my next post.  But, the general idea is to upgrade the lcd with led backlighting which will allow me to use a thinner diffuser.  This may allow me to fit the touchscreen inside the LCD housing and will help alleviate the additional weight.

Unfortunately 16:10 20" LED monitors do not exist, thus, I will have to alter a larger diffuser and backlight in order to fit in the housing.  I can't just add LEDs because the entire purpose is to use a thinner diffuser allowing for the touchscreen to fit.  In theory this method would allow the 20" iMac to have a touchscreen added without any notable external change.

3) New, Larger LCD with Custom Housing
- Adding a 21.5" screen would be ideal, high resolution screens with LED backlighting and IPS would truly be an upgrade.  Also, 21.5" LCDs with optical touch screens do exist and some of these can be multitouch OSX compatible.  But this wouldn't fit in the current LCD housing.  While it may be possible to enlarge the front housing, the back would have to be done custom.  While 3D printing and prototyping services are available, there are certain drawbacks to using the original design.
- The weight would be very different.  Also, the screen would likely use LVDS, so fitting the controller board so that DVI/HDMI would go through the existing TMDS wires in the neck would be advantageous.  Thus, the existing shape may not be ideal.
-  As the 21.5" screen is notably wider, it may start to look awkward.  Elimination of the surrounding clear plastic and wide bezel would help the proportions.
-  This would be very expensive and difficult to reproduce.

4) Redesign using a different LCD Housing:
- I have secured a different housing to the iMac before and made it into a successful mod.  So it can be done even with non VESA complaint monitors.

- Obviously keeping the dome is critical.  It is what gives the iMac G4 its identity and allows the LCD to be pulled forward and rotated in a way that a base alone would not allow.
- The LCD housing would have to look modern, have an apple style, be able to fit a 21.5" LCD and have a weight and width similar to the original G4's housing.  While I know nothing about the weight issue, the obvious candidate is the housing from the 21.5" iMac. 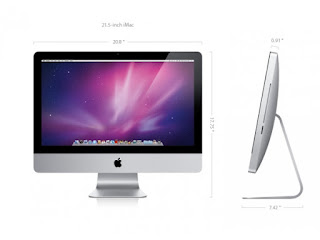 - There are many technical details that would make this impossible.  But here is a very quick mock-up: 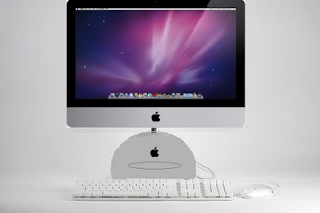 As I have the 20" touchscreen and have already begun, I am going to pursue the original design and housing with the touchscreen and LED backlight, but I may pursue the 21.5" based iMac in the future.  I would love to get opinions and suggestions, so please comment below.  Thank for reading.