Update 11/2/2011: I have finally solved the native inverter issue and as a result, used the same method I used for my 17" Mod and can now say that this pinout works.  A guide will be coming in he future as well. 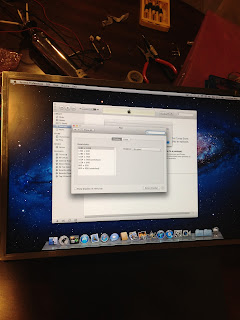 I have received a request for the TMDS-DVI pinout of the 20" iMac G4.  Just like the other iMac G4 panels there is a TI chip which converts TMDS to LVDS, so with a DVI cable and power source the native lcd should be usable with any DVI compliant source.  However, the caveat here is that I have been unable to get the native inverter to work properly.  So, while there may be an image, with no backlighting - it will be very difficult to see.

That said there are work arounds:
1) Aftermarket inverters (works great, needs only 12V, 5V and ground), but I have not found one thin enough to close the case completely - but if you don't mind a little buldge, this does work fine.
2) Alternate Backlighting (LED etc)
3) Get the native inverter working:
What I've learned: It requires a 24V and 3.3V line.  The Dimmer seems to work backwards of most where it requires 3.3V for maximum brightness.  There is certainly a way to do this, but I have already damaged several in my attempts and I felt that even if I got it working, finding adequate power sources that would work together would be difficult.  You would have to use a powersource that has a 24V line such as the native power source for the 20" or the iMac G5's.  I didn't want to have to "turn on the backlights" with a separate switch.  The Apple Cinema Display also uses a 24V line, so I initially thought about using its power brick.  Thats when I realized that the power wiring including a brightness switch and on/off were already done for me by using the 20" apple cinema display itself.  Conveniently, its the same size including thickness and weight as the iMac G4 20"s monitor and housing.  This led me to my Apple Cinema Display/iMac Mod, which has exceeded expectations so far.  But, I can understand the desire to get this as "genuine" as possible.

So here is the TMDS/DVI conversion chart.  This is based on the LCD panel: Id Tech 20" LCD.  Notice there are significant differences from the 17".  This includes different placement of the shield wires and some grounds as well as higher voltage requirements.  Because I never got the inverter working, I have not verified this, nor do I plan to.  As long as ID tech did not misprint the specs, there is really no way this could be incorrect, but you never know until you try. Update: Never say Never
Posted by JBerg at 12:55 PM