So far this mod is as close to perfect as I have gotten, but there are a few things that I felt could be improved.  For one - with the touchscreen and iMac bezel in place there is a one area where I was getting "monitor drift" that is the neck would slip down an extra inch or two when positioned in a certain way.  Secondly I did not love that the touchscreen is located in front of the cinema displays bezel or that it was held on by mounting tape.  Thirdly, despite doing a better job hiding the touchscreen wire, I still found it somewhat unsightly.

My initial intention was to make the touchscreen easily removable, but having used this mod with the touchscreen, I would never remove it.  So I decided to integrate it into the display.  However, the 5wire resistive touchscreen although only a few mm thick will not fit under the bezel.

I looked for film to film touchscreens but could only find them in 18.5" or 21.5".  Plus chances are its not a 5wire.  I know everyone wants capacitive, but 5wire resistive is very durable and for the price, very reasonable.  For those interested the screen I use:

The company ships fast and it packages it very safely in a plexiglass lined box.  So here is how to integrate the touchscreen.  Again this is only for people that are using this particular touchscreen. 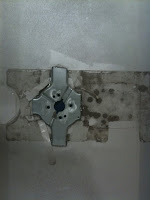 To start I wanted to decrease the weight a little bit to compensate for the touch screen.  I decided to remove the top portion of the bracket.  Although this gives less surface area for the glue to hold.  The weight is actually supported by the aluminum frame itself - so this part protects from rotation more than anything.  I used cold weld epoxy and am confident that even without the top of the bracket its not going anywhere.  But I still had to figure a way to mount the touchscreen flush against the lcd. 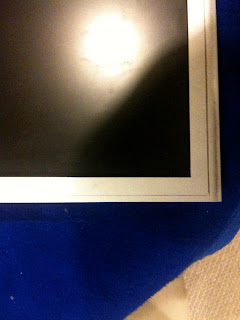 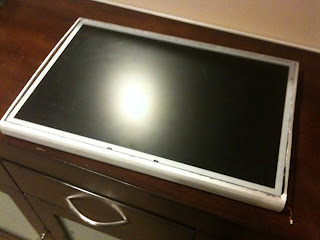 So to solve this I actually cut out part of the front bezel of the apple cinema display.  I positioned the touchscreen in the center, traced around the screen and dremeled that area out.  This allowed me to put the touchscreen flush against the lcd screen and the monitor is still securely held by the remaining bezel.  The touchscreen is also firmly held in place by the square cut for it.

To the left you can see the difference.   The new bezel is pictured on the bottom.  You can see the front is much thinner as well as having the smaller bracket.

One complication of this is that the Cinema Displays LED indicator gets cut off.  This gave me the opportunity, however, to use the native iMac G4s LED.  As they use different 2 pin connectors of opposite sex, I had to create a hybrid using the LED wires.  I can then plug the LED wires coming from the Apple Cinema Display's Control Board into the ribbon LED from the native iMac G4.  The ribbon cable easily fits between the touchscreen and the bezel.

I then used tape for two reasons.  One, I wanted to make sure the touchscreen doesn't fall forwards (even though its wedged in there very snugly).  And secondly, I wanted to give an area where I could put an epoxy to adhere to the iMac G4s front bezel (without gluing directly to the touch screen), which becomes the new front, replacing the Apple Cinema Displays front which was largely dremeled out.

The touchscreen ribbon cable now goes internally and thus no cables are visible.  It connects to its 5 pin adapter and goes down the neck to meet the controller in the base. Its difficult to see in this picture, but the touchscreen is now flush with the remaining part of the Apple Cinema Displays front bezel.  Using epoxy the iMacs bezel was attached, sealing off our now heavily modified hybrid case.  The case still opens and closes like the original Apple Cinema Display, but now the touchscreen and iMac bezel are fully integrated. 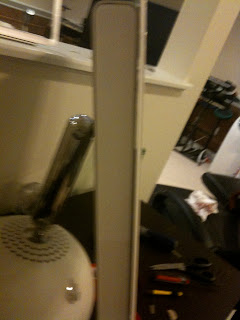 The best way to see the difference is from the side.  Previously you had Apple Cinema Display with a few mm of touchscreen visible in front then the iMac bezel.  Now the new bezel interacts directly with the original case.  Plus, there is now no visible wire anywhere as everything is internal.

In addition, there is no "monitor drift" - NONE!! Not in any position.  If this is the effect of some weight removal or simply moving the touchscreen inwards a few millimeters - I can't be sure.   But, either way it worked.

As a side note, you may notice some of these pictures use the apple cinema display that I had painted white.  After looking at the white version, I decided to stick with the original silver of the apple cinema display.  For one, I am not the best painter and it had already chipped in places.  Secondly, the silver really goes and it matches well with apples keyboard/mouse and even the mac mini.  Although using the original display would be ideal, I feel this has some advantages.  The presence of USB (and firewire if you wanted to hook it up), on/off switch, brightness control, more mod friendly (room for longer cables etc.).  As always, questions, critiques etc are welcomed.