After success with the 17" I was hoping good fortune would carry over to the 20" mod.  However, the 20" Inverter has continued to be a problem.  As the DVI/TMDS is essentially the same as the 17" (with just extra power to the panel) I don't anticipate this being a problem.  So the task of turning on the backlights seems simple enough.  Here are the problems and failed solutions I have tried: 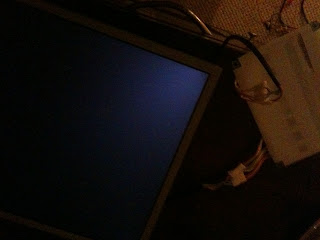 The original inverter is remarkably flat  and specifically designed to fit in the monitor chassis. I have not been able to get consistent even lighting.  It does require a 24V line so I am using a separate DC line to power the 2 24V lines. As you can see I have gotten some response.  By giving 12V to the on/off it can become very bright.  But, this is neither stable nor even.  Without a doubt there is some way of mimicking the iMac's signal and use the native inverter.  But, I am not an electrical engineer and the entire purpose is to keep this as simple and stable as possible.  I have thus moved on in an attempt to find another solution. 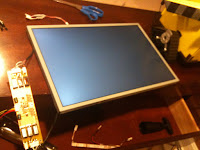 Aftermarket inverter.  Available on ebay are several relatively cheap universal inverters that can support 6 ccfl lamps with a 4pin and 2 pin connectors.  This one was $30.  I'm not sure if the picture does it justice with the glare, but the screen is evenly lit and bright.  Whats more is that the connections are very simple.  There are two 12V rails, 2 grounds, one on/off - which takes 5V, and an adj/dimmer.  However, while much narrower, it is longer and more troubling, slightly thicker than the native iMac G4 inverter.


I thought it may be possible to make it fit in the case with some alteration using a multi-max dremel.  The back of the monitor housing uses "raised x's fit the monitor tightly.  I thought that by removing these raised areas I may be able to create a little more room for the thickness of the inverter.  As you can see below on one side the "Raised X" has been removed and sanded down (this does not damage the back or outward appearance at all).  I then placed the inverter in at several angles (to try I didn't use the protective plastic covering). 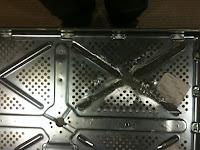 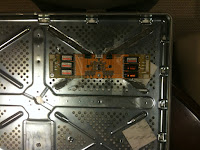 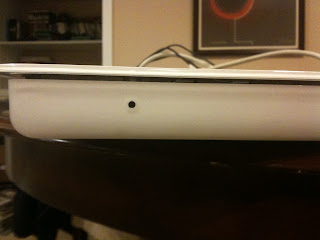 As you can see it just doesn't fit .  I don't want to press down firmly, screw it in, and leave it under pressure.  I know it may not look like much but it extends around the entire side of the monitor.  As I was hoping to make this a touch screen as well, the monitor is likely to be somewhat unstable in the housing.  So I looked for other 6ccfl inverters that may be slightly thinner. 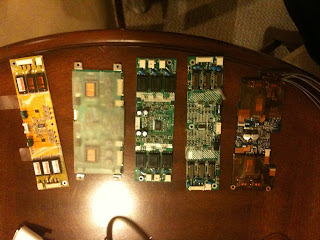 Here are 5 inverters that are designed for 6ccfl monitors.  From top to bottom: an iMac G5 inverter, aftermarket on ebay (4pin/2pin), aftermarket on ebay (2pin x 3), a 20" apple cinema display inverter, and the aftermarket inverter used above.  The only one that the case would close with (even with the dremel modification) was the cinema display inverter.  However, it still took a little force and unlike every other inverter pictured, this is not a straightforward inverter (there are actually 8 pins - more than the iMac).

I had also thought about using LED lighting (which does not require an inverter) however after a brief test of constructing my own led rail, I was not happy with the results (uneven lighting).  Putting the iMac's LCD onto a commercially manufactured  20" LED backlit montitor would likely work very well.  However, they simply do not manufacture 20" LED backlit LCD's in the 16:10 (1600x1050) orientation, which would be required for this mod.

So, I am left with 2 options: Continue to search for a solution to the 20" backlighting problem or to complete the all in one mod using the already built 17' monitor assembly.  I do have another idea for the 20", so I am not giving up yet.  After using my previous 17" mod for sometime, I do have to concede that a 17" monitor seems awfully small these days and a 20" would be preferable.  Plus, I have located a 5 wire resistive 20" touchscreen which would be ideal for this mod.  If anyone has any ideas, tips, or suggestions, they would certainly be appreciated.