What you see here can be applied to the other iMac G4's, just use the correct pinout.  This is the first time I have ever done a mod in front of the camera and this was more difficult than I anticipated.  This was done live in real time (for the most part).  I sped through the portions that were simply repetition (such as stripping a wire or pushing out every last pin) and did cut very small portions (mostly because I felt I said or did something confusing).  I do apologize for frequently pulling out of the shot, its hard to work on a small item with a camera in-between you and the project itself.  I still believe this is useful to people who are better at visualizing than pinouts or snapshots.  Also, you can get a sense for the time this takes.  While soldering and stripping can take days, without the camera and explanation, I could have finished this in an hour.

There are a few highlights:

-  To make the extra wires I used the iMac's own ground pins.  This worked great and saves you having to buy an extra neck.  This is certainly the way I would recommend proceeding at this point.

-  Frustratingly, I have purchased a refurbished 17" 1ghz neck to use in this demonstration (as I did not have any more completely intact ones).  It did have some variation in that in the black lcd cable, one of the four wires in the black cable, the Red Wire was replaced with a Gray/Off White wire.  In addition all the the positive TMDS wires that emerge from the four wires that are usually Red, were also Gray/Off-White.  I have seem a random color variation in refurbished necks before, however, it was frustrating that for my demo, this one had more variation than I have seen before.  So just remember, for the black LCD cable Gray = Red.  And also be aware that this variation does exist.

- The final part that involves connecting the Red Inverter Wire to the VEDID/Pin 14 is very important because of the way we have it setup.  The inverter will not turn on appropriately unless this step is done.

-  When making the extra cables from the 3 ground wires with pins in the iMac's Gray Cable, I add one extra wire (a black wire I took and stripped from the iMac's fan cable).  The wire is not really necessary, you can hook the resistor directly to the other wires, but I feel that one extra wire not only makes it more secure, but also gives an extra area when we split again by adding the Red Invereter Cable.  Remember this actually becomes a 3 - way split with 1 split going to the LCD via the iMac's own Red/Hot Pink wire, 1 split going to a resistor then back to the DVI via Pin 16, the hot plug detect, and the final split going to the Red inverter wire.  So the extra wire allows us to kind of split once, then split again, as opposed to a direct 3 way split.

This has also been integrated into the blog, but here are all 9 parts together:

Part 5: Hooking up and Testing the Inverter


Part 9: Finalizing the Inverter and Demonstration


Hope this helps and good luck.  Thanks for reading and watching!
Dremel Junkie at 8:02 PM 13 comments: 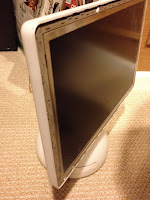 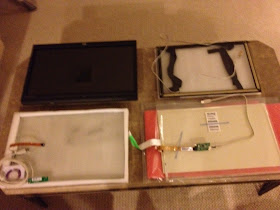